The British Rail Class 91 is a class of high-speed, 4,830 kW (6,480 hp) electric locomotives ordered as a component of the East Coast Main Line modernisation and electrification programme of the late 1980s. The Class 91s were given the auxiliary name of InterCity 225 to indicate their envisaged top speed of 225 km/h (140 mph), and were also referred to as Electras by British Rail during their development, and throughout the electrification of the East Coast Main Line. The other end of the InterCity 225 train set is formed of a Mark 4 Driving Van Trailer, built with a similar body shell to the Class 91 locomotives. The locomotive body shells are of all-steel construction. Unusually, the motors are body mounted and drive bogie-mounted gearboxes via cardan shafts. This reduces the unsprung mass and hence track wear at high speeds. The locomotive also features an underslung transformer so that the body is relatively empty compared to contemporary electric locomotives. Much of the engineering specification for the locomotive was derived from the research and operational experience of the APT-P.

In 1985, ASEA, Brush and GEC Transportation Projects tendered for the design and construction of the Class 91s. GEC subsequently won the bid and the fleet was built by sub-contractors British Rail Engineering Limited's Crewe Works between 1988 and 1991.

In the early 1990s, after the cancellation of InterCity 250, British Rail examined the option of ordering a further set of ten Class 91s to operate on the West Coast Main Line with UK Treasury support, however the business case for these failed to prove sufficiently worthwhile, and led to the electric Networker Classes 365, 465 and 466 EMU Networker stock's procurement being taken forward. 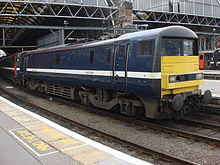 The asymmetric body style is streamlined at one end to allow high-speed operation with the fixed sets of Mark 4 coaches in normal push-pull passenger operation. An additional requirement of the design was that they could operate as normal locomotives. This led to a second cab being incorporated into the unstreamlined 'blunt end'. Operating with the blunt end first limits the maximum speed of the locomotive to 110 mph (180 km/h) due to the aerodynamics of the pantograph's knuckle creating excessive uplift force on the OLE. 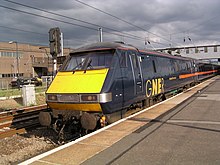 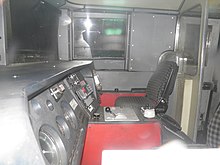 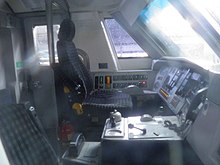 the normal cab of a class 91

When British Rail was privatised, the Intercity livery was progressively removed. New operator GNER applied their corporate livery of blue and red. When GNER lost their franchise in 2007, the red stripe was replaced by a white stripe containing the words National Express and East Coast. National Express East Coast originally planned to repaint all of their InterCity 225 sets in the white and silver NXEC corporate livery within two years. However, the collapse of NXEC in 2009 and its replacement with East Coast saw this repainting programme cancelled. As a result, 91111 was the only Locomotive to receive the full National Express livery.

In June 2010, a new silver livery with purple stripe was unveiled by East Coast. As of February 2011, locomotives 91101, 91106, 91107 and 91109 being the first to carry this livery. Locomotive 91101 has since been given maroon vinyls, with Flying Scotsman branding. Locomotive 91107 was given promotional "Skyfall" vinyls for a time during 2012/3. The locomotive later returned to conventional Virgin Trains East Coast livery. Locomotive 91110 carries 'BBMF' Battle Of Britain Memorial Flight livery. All locomotives now carry the standard East Coast livery of silver/grey with a purple stripe. 91118 the last locomotive to carry GNER/NXEC livery has now been repainted. All Mark 4 coaches and DVTs have since been repainted. On 14 October 2014 at Newcastle station, locomotive 91111 was unveiled in a commemorative World War One livery and named 'For The Fallen'.

The Class 91 fleet has carried various nameplates applied in various batches and themes. Immediately after repainting into GNER colours in the late 1990s, all locomotives were briefly nameless. Having initially been applied to only a few locomotives in the early 1990s using cast-iron plates, eventually the whole fleet was named, many multiple times, until all were removed in 2008. In 2011, in response to customer requests, East Coast resumed the practice. It began by naming No. 91109 as Sir Bobby Robson with cast-iron plates, unveiled in a ceremony at Newcastle station on 29 March by his widow Elsie and Alan Shearer.

Locomotive 91023 was involved in both the Hatfield rail crash and the Great Heck rail crash. After refurbishment in 2001 it was renumbered 91132 (rather than 91123).

In November 2012, unit 91114 had a second pantograph added as a pilot project operated jointly by Eversholt Rail Group, East Coast, ESG, Wabtec Rail and Brecknell Willis. The new design uses the same mounting positions as a conventional pantograph but pairs two pantograph arms in an opposing configuration. If there is an ADD (Automatic Dropping Device) activation or the pantograph becomes detached, the train can keep going, so the system provides redundancy in the event of a pantograph/OLE failure. This has since been removed, but the extended lower roof is still visible.